The port of his Quality 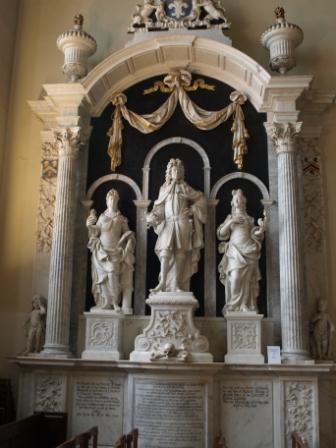 At the dawn of the eighteenth century in England there were certainties and proprieties that we can only dream of. John Digby died without issue (despite his second wife’s having ‘possessed his affections entire’) and his titles became extinct, but we may be assured that his qualities survived him and flourished.

Perhaps also we should take heart that more may survive from that golden age than at first appears: great men who achieve little in the holding of public office, and the condescension of the worthy to their inferiors.

Lord John was briefly Member of Parliament (Tory) for Dorset 1675-77, Lord Lieutenant of Dorset 1679-98 and Vice-Admiral of Poole, but he fails to rank an entry in the Dictionary of National Biography, and I fancy Rachel, who survived him, was the true office holder. It seems that so busy was she with the utmost proofs of the reality of her late husband’s perfect friendship and confidence, that she had not even the time to look up the exact date of his first wife’s death. 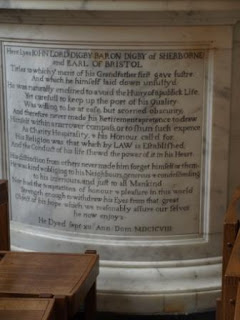 Here Lyes John Lord Digby Baron Digby of Sherborne and Earl of Bristol
Titles to which ye merit of his Grandfather first gave lustre.
And which he himself laid down unsully’d.
He was naturally enclined to avoid the Hurry of a publick Life,
Yet carefull to keep up the port of his Quality.
Was willing to be at ease but scorned obscurity;
And therefore never made his Retirement a pretence to draw
Himself within a narrower compass or to shun such expence
As Charity, Hospitality, & his Honour call’d for.
His Religion was that which by LAW is Established;
And the Conduct of his life shew’d the power of it in his Heart.
His distinction from others never made him forget himself or them.
He was kind & obliging to his Neighbours, generous & condescending
to his inferiors, and just to all Mankind.
Nor had the temptations of honour & pleasure in this world
Strength enough to withdraw his Eyes from that great
Object of his hope, which we reasonably assure ourselves
he now enjoy’s.
He Dyed Sept XII: Ann: Dom: MDCICVIII.
His first wife was ALICE, the daughter and Heir of ROBERT BOURN of BLAKE-HALL in the COUNTY of ESSEX Esquire
She was Marry’d the 26th of May 1656
DY’d in May 1658
His second wife was RACHEL ye Daughter and one of the Coheirs of Sr. HUGH WINDHAM of SILTON in ye COUNTY of DORSET KNIGHT.
Who possess’d his Affection entire.
With whom he lived in perfect friendship and Confidence and to whom he left the utmost proofs of theire reality.
She Dy’d the 16th of Feb. 1708.